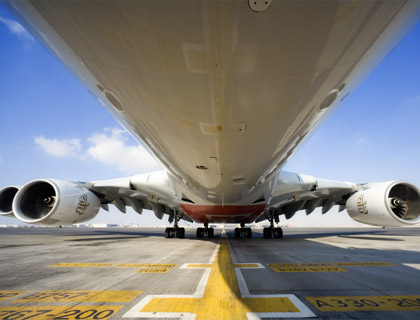 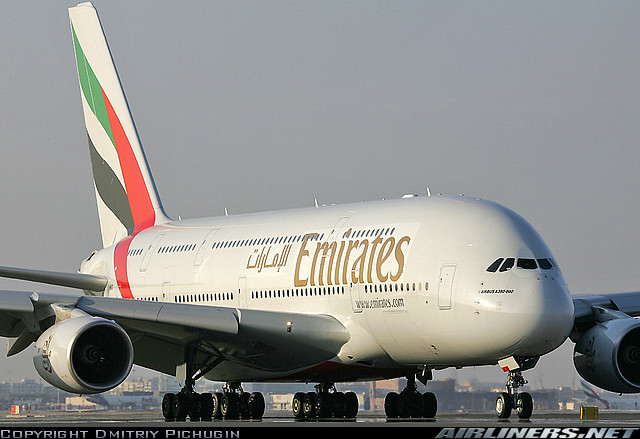 This flight took place on Feb 2nd 2009, from Dubai to London Heathrow EK001

Our journey from the Hotel to Dubai was early enough to avoid the notorious Dubai Rush hour (<G>) and in the luxury of a Lexus Limo.
As Club passengers Emirates supply a car to pick up and drop off in London, without charge if within 50 miles of the Arrival airport,
certainly an advantage when flying Club Class, as we were later to find out...

Mark and I arrived at the First and Business Terminal Entrance and checked in swiftly,
The extra 10 kilo's very welcome after nearly a month away, Security was easy with few passengers, and a lift sped us up to the Lounge mezzanine floor.
We were dissapointed by the numbers in the Club Lounge, and I would say I prefer the comfort of the Lounge in the Old Terminal.
Breakfast was taken, and the call for boarding came at 07:10.

First and Club gates are conveniently on this mezzanine level so you would need to descend to make use of the Duty Free facilities. 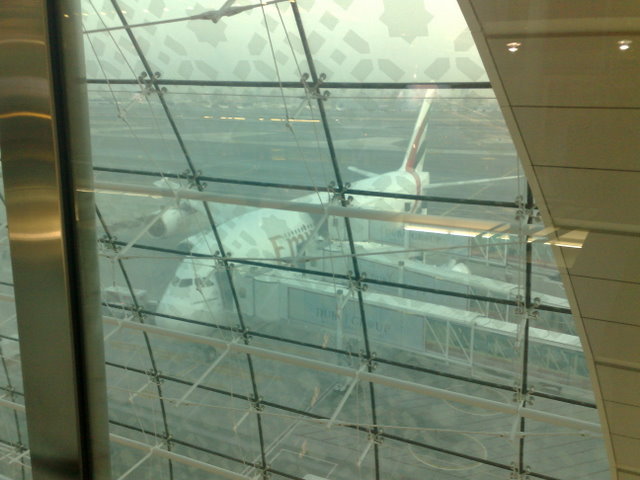 The third Airstair in this picture connects directly to the upper deck
Can you see the lower deck passengers all cramming in ? 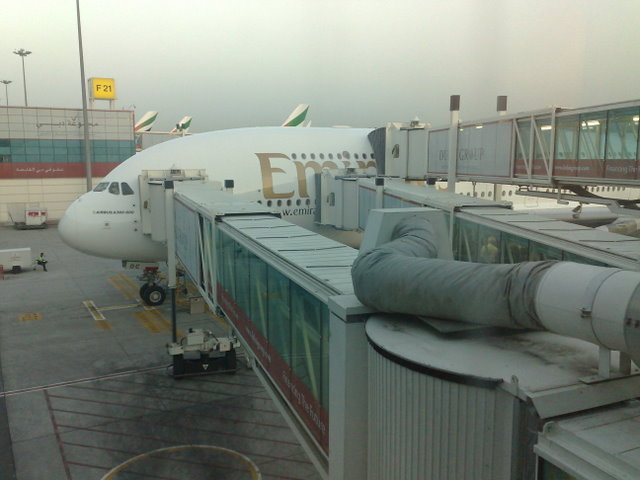 Once on board 23 Alpha and 23 Kilo were discovered in the rear upper cabin. 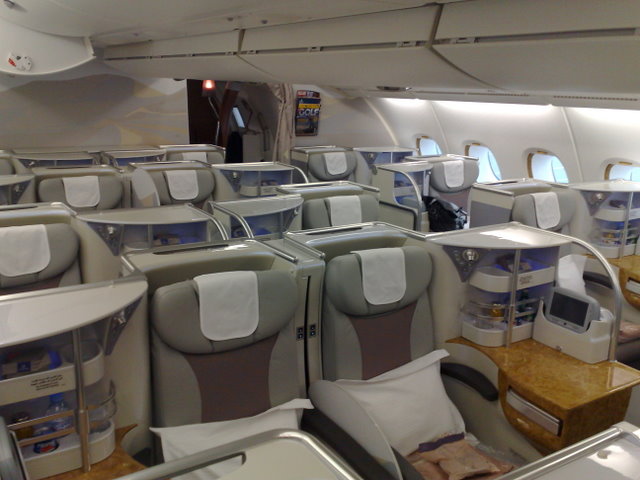 After doors closed there were just 4 passengers in this 18 pod compartment
I would guesstimate 24 Club and 7 First Class travellers on this flight.

Each pod has a nearly perpendicular lie flat bed with 6 zone massager, a 20" screen with the usual I.C.E. system from Emirates
It would take a couple of years to listen/view all their collection. 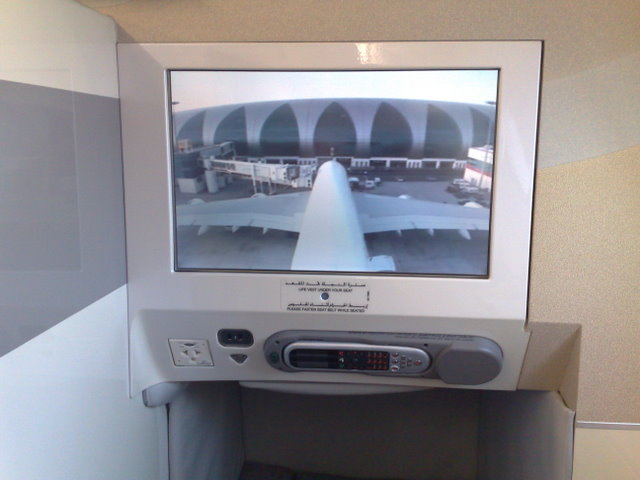 I was more interested in the Flight Information Section, and this new view from the on-board camera's.

At the hotel we had heard that Arctic weather had brought snow to the UK and it was predicted as the worst in 18 years
Gatwick and London City were already closed, and Heathrow was accepting a few incoming flights on the one cleared Runway....
Victoria (the Purser) during her personal visit, recalled the flight deck conversation
"Further heavy snowfall expected during the morning with a 2 hour window around our arrival time before worstening forecast.
If lucky we should have no problems.... " 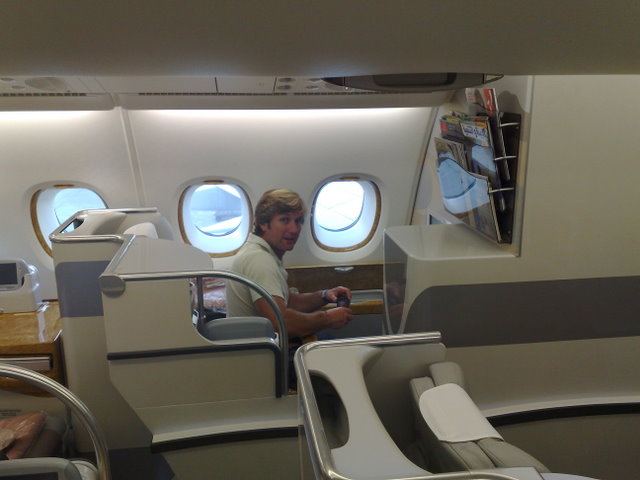 Each pod has a deep footwell, incorporating a bin for your shoes, a mini drinks compartment with water and soda's
There are 2 huge bins against the sides which house all the blankets, pillows and the like. (easily opened inadvertently by your elbow).
Eye shade and Toilet bag are supplied, along with some comfortable high quality noise cancelling headphones.(powered by the socket).
I had only just time to enjoy the hot towel and Champagne before we were pushed back by the tug, and Iroon came to check that I was strapped in.

Take-off run felt quite long, but extremely quiet, almost as if on half power, with a little shuddering up to ~ 600ft.
Wings clean was achieved quite rapidly and it would appear that speed restrictions do not apply over the UAE 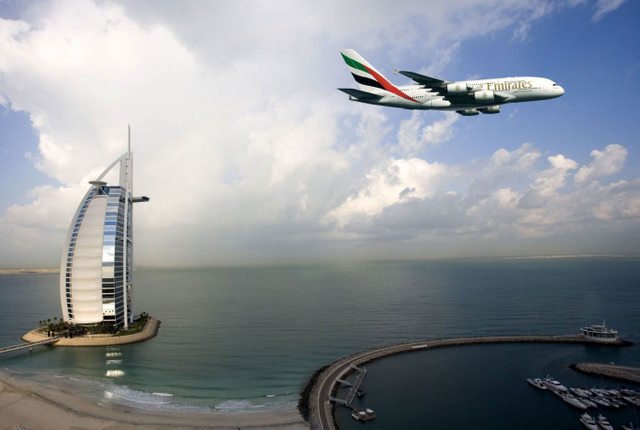 Stepped climb proceedure saw us to 9300m (31,000ft ) within 40 minutes, where we stayed for another half an hour.
We used this opportunity to renew our Champagne glasses at the Club bar,
and to descend the sweeping staircase to Economy to see how our usual seating fared.
I can recommend the Bloody Mary's (No Celery please) which I "Ataaackt !" 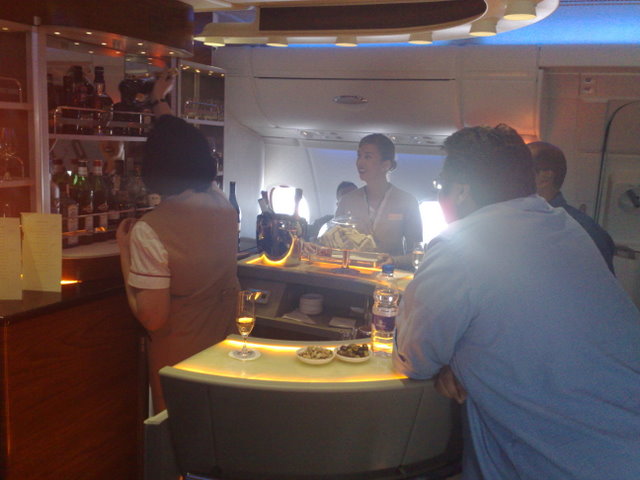 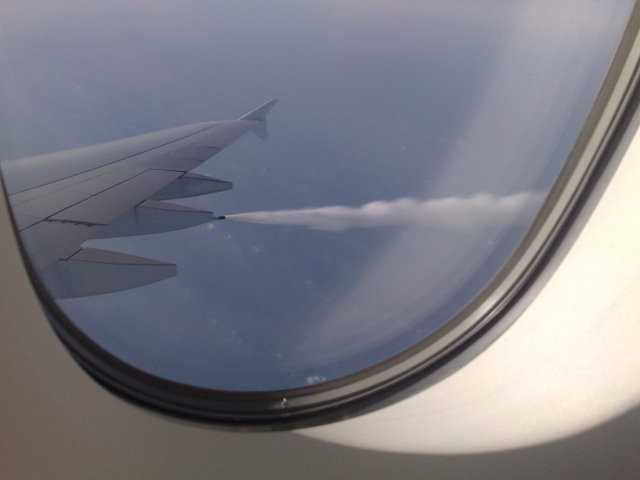 It felt like we were now in a hurry, and any window behind the trailing edge showed the full story "Fuel Dump!"
The tea with breakfast was finished, but I declined the need for the rest of my order, this was exciting!
We were quickly descending and wind direction meant a straight in approach to 12R
I see the new Sheik Mahktoum Airport in Dubai will have 6 parallel runways L, C, R and err? nother 2

The patient was evacuated from the aircraft, along with a businessman who would have missed his meeting in London,
so by the time his bags were found and fuel loaded it was 12:30 before we took off again, almost 5 hours after the first go.

The time on the ground, wasn't wasted, as the crew decided to keep the bar area open, although the alcohol was stowed
there were all manner of bar snacks, sandwiches, pies, mini baked potatoes, fondants, cakes - oh and did I mention the Champagne?

Phones had been allowed on and information exchange was rapid...
M25 closed - 11"of snowfall overnight - Flights cancelled across the UK.
How was this going to affect our 2 hour window? "Manchester or Frankfurt" said the ever present Victoria
"I know these things can operate into Farnborough " I hopefully offer.

We learned that Emirates most senior pilot was operating this as a Training Flight, so today was already a great learning experience for this crew! 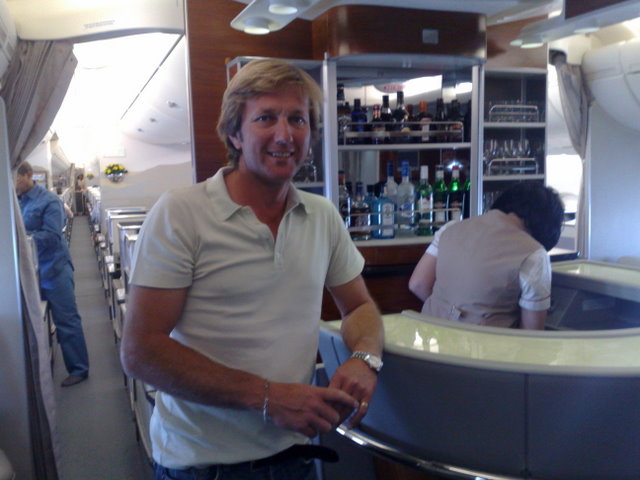 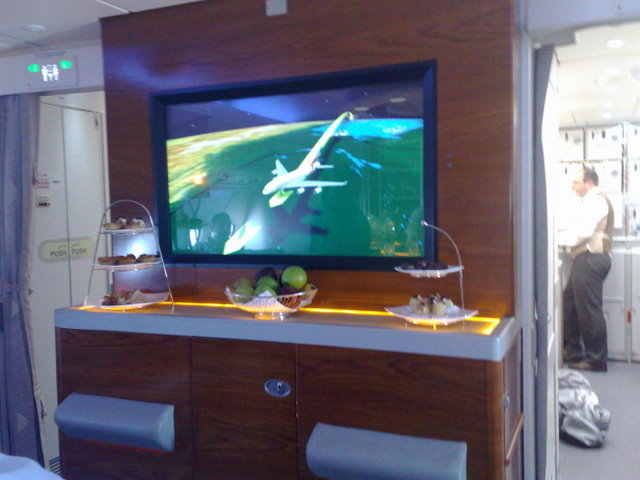 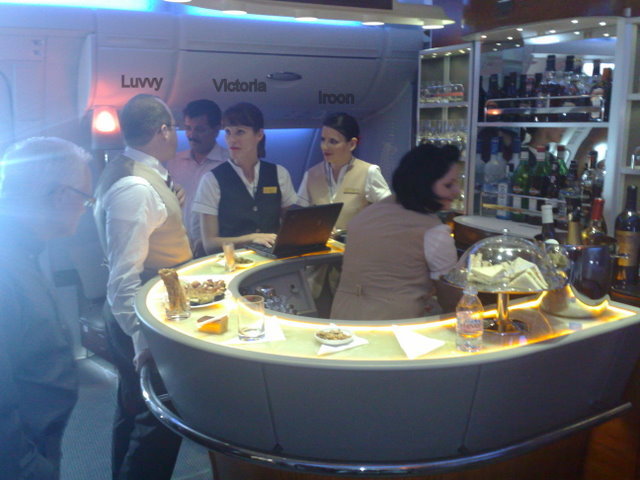 The Doctor who had tended to the heart patient, came back from First Class, saying it was a little boring
"Pah Mostly Golfers!" he did report later that the shower was sensational, "only 5 minutes of water per passenger though!"

We spent most of the flight to-ing and fro-ing bar and pod.
The main meal was served a course at a time, but was not of exceptional standard, Mark's fish choice "running out" also a shocker.
But a good choice of French and New World red's were on offer, completed with a coffee and Drambuie 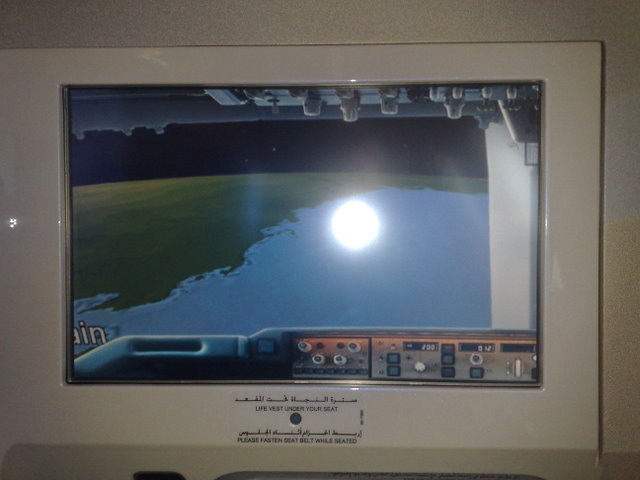 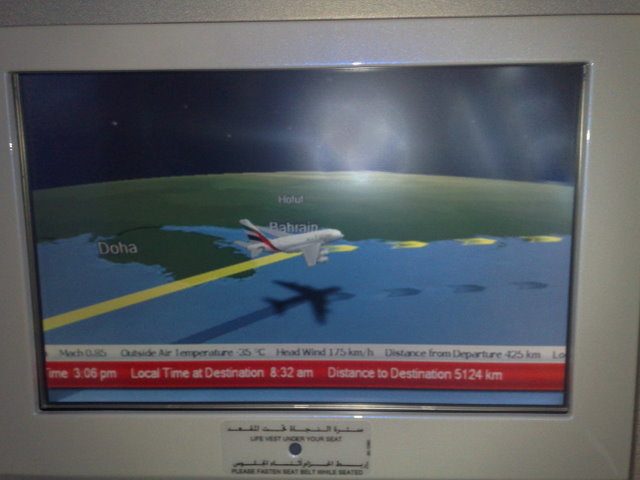 Some short Video's from my mobile phone

I admit that when I first learned of the double decker, I was horrified. All those people, getting on and off at once.
Travelling Club Class was a treat, and I really enjoyed it. We were aboard for 12 hours and it felt like 3.
The Emirates crew were fantastic. Service and comfort, fantastic. Limo to and from, fantastic. I could do it every week.

It didn't look too good for downstairs! They say it is better, roomier, but I'm glad my bag came off in the first 20, it was getting pretty tight around the luggage conveyer!

I'll certainly do it every time that Skywards Miles allow.